Sierra Nevada, Spain, which will be open into May this year...

Yet more March snow for California, and Europe, as winter continues.

This Week's Snow Headlines
- Still more huge snowfalls in California - one resort claims 5m of snow this month.
- Snow in the Pyrenees - another 20-40cm at several ski areas.
- Bigger snowfalls in western Spain.
- Base depths still climbing in the Alps, deepest base reported at 6.5 metres.
- Strong winds lead to some temporary slope closures and increase avalanche risk.

It should be Spring, but mother nature is still very much in winter mode; with plenty more snow this week in the Alps, the Pyrenees and Scandinavia - and low temperatures most of the time too. Across the Atlantic she's even more determined to keep winter going with what they're calling the 'March Miracle' - massive and continuing snowfalls after a largely warm dry winter up to March 1st.

Strong winds have been a factor at ski areas across Europe over the past week. Some areas in the Alps were closed on certain days over the weekend and parts of the world Cup Finals due to be staged in Are, Sweden, including the Men's slalom, were also cancelled due to the strong winds. These conditions have also been a factor in the avalanche risk level going higher in some areas, typically from level 2 to level 3 ("considerable") on the scale which goes up to a maximum of 5.

One interesting snowfall factor that has gone unnoticed by some snow observers are huge snowfalls at little ski areas in northern and western Spain all through March, with some of these clocking up 90cm more snow in the past few days, the most on the continent. Ski resorts in the area are saying these are the biggest snowfalls there for a generation with lifts and buildings buried in drifts.

The week ahead looks like bringing still more snow in Europe and North America and with Easter only a week away it's looking like this will be one of the best in terms of snow cover almost everywhere for many years.

The current cool and clear weather across much of The Alps will continue for a few more days, before temperatures move toward more Spring-like averages in about a weeks time.

The outlook is very uncertain beyond that time - could go cold, could go warm - but it does look as if the first week of April will bring un-settled weather and a fair amount of precipitation.


EUROPEAN ALPS
Austria
There's been fresh snow in Austria over the past few days with up to 25cm of fresh snow on higher slopes. The Stubai and Pitztal glaciers reported the biggest accumulations along with the Ski Jewel region (Alpbach and Wildschonau) but many areas have received 5-15cm.

A lot of lower Austrian ski areas will close in 2-3 weeks after Easter but this season most could stay open longer as almost all have at least 2m of snow on upper slopes. At lower elevations it's more of a mixed picture with some ski areas only having only 15-30cm of snow down at resort level (Brand, Badgastein, Solden), whilst others still have a metre or more (Galtur, Obergurgl, Obertauern).

France
Remarkably, bases are still building in France and ever more of the big high-altitude resorts have passed the 4m base-depth mark with Avoriaz and other Portes du Soleil Resorts topping the table at 4.8 metres, La Rosiere not far behind on 4.7m and the Grand Massif region around Flaine at 4.6m. The bases are growing thanks to more fresh snow in the past seven days, particularly at the weekend and end of last week.

French resorts are also showing very big base depths at the bottom of the slopes still in most cases, at least a metre and in some cases over 2 metres. There are exceptions – a few traditional village like Sixt are down to 15cm but even Morzine has 60cm at resort level still, so it's looking good for Easter and April. The biggest snowfall in the past few days has however been down in the Pyrenees where around a foot of fresh snow has fallen.

Italy
Italy's ski areas have seen some of the biggest snowfall in Europe of the past week, with up to 41cm reported in the last three days at one small area. The snowfall has been low to moderate so no fast build ups of base depths and it has been patchy with some areas getting 30-40cm over a few days, others nearby only half that, but it has also been widespread with ski areas from the Western alps to the eastern Dolomites and down the Apennines all posting fresh snowfall numbers.

Here too, the numbers are looking impressive for spring skiing with many Italian areas reporting 3-4m bases and Cervinia, as usual, which is open for nearly two more months, has one of the deepest bases in the country and says the snow is still lying 2.2m (over six feet) deep at resort level (over 4m up top) so the long verticals down from the Klein Matterhorn are looking secure right to the end of the season this year.

Switzerland
Switzerland has had another missed week with lots of fresh snow at times, along with some sunny days, some cloudy but dry. Strong winds have been a factor here too and it's in Switzerland that the avalanche danger level has been creeping up, partly as a result of that. So for example Arosa reported 25cm of snows in the 24 hours to Monday, Melchsee-Feruitt the same amount in the 24 hours top Tuesday and so it goes on – most of Switzerland getting small to moderate snowfalls with the occasional spot getting so much in a day it creeps over the 20cm mark to trigger a powder alarm.

Engelberg still has the world's deepest snow base after another 20cm of snow – at 660cm (22 feet).

Eastern Europe
It's looking fairly good in Eastern Europe as Easter nears. There's been a little fresh snow at Bansko in Bulgaria in the past few days and forecasters expect a foot of fresh snow may fall there and at other areas like Borovets by the end of the week. Some ski areas in other countries like the Czech Republic are also reporting good sporting skiing conditions although here too there have been strong winds causing issues in recent days.

Scotland
It's still looking good for Easter on Scottish ski slopes with all five centres still open and all with most of their lifts operating and runs accessible. There are the usual weather provisos – there was limited terrain open at Cairngorm at the weekend as strong winds and drifting snow hampered operations but the start of this week has seen a return to perfect blue sky, no wind Scottish ski days.

Pyrenees
The Pyrenees still have good snow depths moving in to spring with the ski resorts in Andorra fully open with bases at around the 2m mark still on upper runs. The biggest snowfalls reported in recent days have been on the French side of the mountains where up to 25cm of new snow fell in 24 hours between Monday and Tuesday this week.

Scandinavia
There's been a return to snowier conditions in Norway this week with several ski centres reporting 20-40cm of fresh snow since the weekend and most at least 10cm. It's not all good news though as weekend weather at the region's biggest resort, Are in Sweden, was too windy for the World Cup finals planned to take place there.

North America
Canada
The start of spring is often a great time to be on Canadian slopes as the long dark nights and double digit sub-zero temperatures tend to give way to long days, warmer temperatures but still the deep bases that have built up through the winter. It's early days but in most areas Spring 2018 is looking good. Massif du Sud in Quebec is actually posting the deepest base in Canada, and the world, a 666cm but we think they may be loading the numbers wrong as they're also saying they've had 6.9 metres if snowfall since the start of the season, and bases aren't usually the same as the amount that has fallen from the sky. That said it does look VERY snowy there still and it's one of the places to report a big snowfall at the end of last week, clocking up another 60cm. Mostly though the deepest bases are on the week with 2.5 – 4.5m the norm, good for the last month or two of the season there.

USA
The US has been enjoying what they're calling 'March miracle" snow storms on both East and west Coasts after a lacklustre Dec-Feb on the west and a warm Feb after a good start on the East. All the new snow has transformed conditions on both sides of the country with ski areas re-opening in the East and looking forward to several months of spring skiing in the West. Squaw Valley reports 5 metres of snowfall so far this month and says that is a little ahead of the record breaking January 2017 accumulations. There have been a few dry days since the weekend but more huge snowfalls are forecast for the latter half of this week.
The Admin Man

Luxury Hotels and Apartments in Alpbach 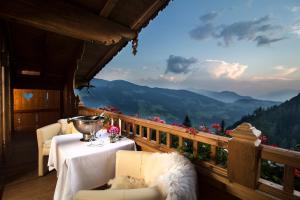